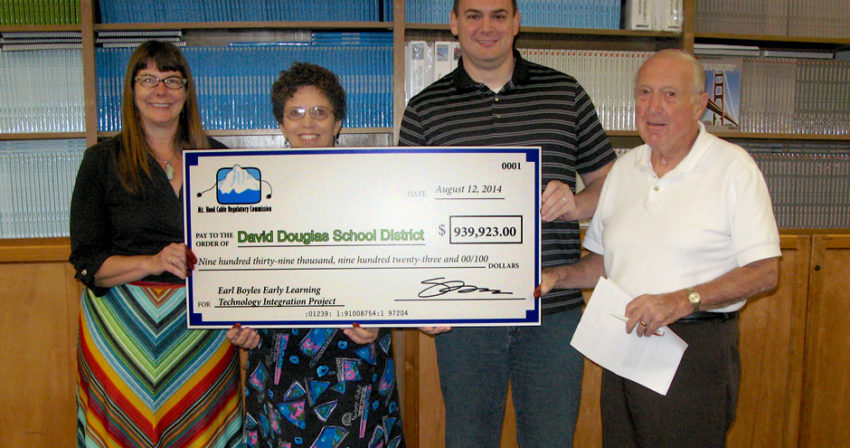 The grant is part of the Commission’s new initiative aimed at boosting educational results for students throughout Multnomah County by integrating new technology into classrooms.

The funds will be used to create a 3 year demonstration site at Earl Boyles Elementary, which this year is opening its ambitious Early Learning Wing and Neighborhood Center as the most effective means of combating the achievement gap that under-served children often bring to Kindergarten.

Children of poverty are often 2-3 years behind their peers when they come to Kindergarten. If they don’t catch up by 3rd grade, they are at a significantly higher risk to drop out of school before graduation.

The Early Learning Wing and Neighborhood Center focuses on families with children birth to 5, providing adult services, as well as free preschool to 3 and 4 year olds in the school’s catchment area.

The grant from MHCRC will infuse technology devices – iPads, Chromebooks, Smart Boards, translation headsets and other hardware –into classrooms from preschool to 3rd grade to support learning.

In addition, teachers will be trained in online digital content and resources to take advantage of the technology and create effective learning environments for all students. The grant funds helped pay for a technology coach who will work with teachers at Earl Boyles.

The MHCRC grant augmented an ongoing, $3.5 million campaign to raise funds for the Early Learning Wing and Neighborhood Center. Voters in David Douglas approved a $49.5 million bond in May, 2012, and $3.5 million of that also went toward the $7 million project.

A grand opening for the Early Learning Wing and Neighborhood Center is scheduled for Sept. 18, and MHCRC will be recognized at that event.