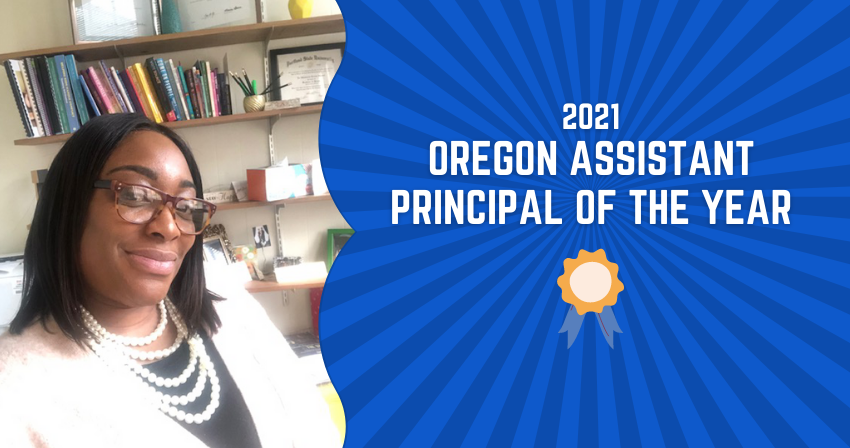 LàShawanta ‘Taye’ Spears of Alice Ott MS is the 2021 Assistant Principal of the Year for the State of Oregon. The award was announced last week during a surprise visit to a virtual Alice Ott staff meeting by Craig Hawkins, Executive Director of Coalition of Oregon School Administrators (COSA).

She was nominated by Melissa Cantwell, a special education teacher at Alice Ott, and was selected by her peers in the Oregon Association of Secondary School Administrators (OASSA). She is now one of 50 finalists for the National Assistant Principal of the Year award.

Among other attributes, Cantwell credited Spears with effectively using an inclusive model to raise scores of students with behavior issues, while decreasing referrals and suspensions, allowing these students to gain independence while advocating for themselves in the classroom

She couples this with high expectations for both staff and students and centers professional development on equity, inclusion and de-escalation, Cantwell added.

“Inclusion, equity and making school a safe place where students and staff want to be is a hallmark of Mrs. Spears’ leadership,” Cantwell wrote. “Her professional growth and leadership among her peers reflect this commitment.”

Spears is the first David Douglas administrator to be certified in restorative practices.  She launched the first African American Family Night at Fir Ridge, which has evolved into a Multicultural Night at Alice Ott.  She started the first Black Student Union for middle school students.  Spears has served at the state level as a member of the COSA Board of Directors since 2017, and was a founding member of the COSA Equity Board in 2018. At the district level, she has been part of the DDSD Staff of Color Affinity Group since 2018 and on the DDSD School Board’s Equity Team since 2019.

“LaShawanta’s leadership has been truly meaningful not only in her school, but also at the state level over the past five years,”OASSA President Majalise Tolan said. “And, over the past year, during this time of the COVID-19 pandemic and social and racial justice awakening, she has set an amazing example for all of us. She and her daughter organized a large and peaceful social justice march, she has delivered food boxes, and she has conducted home visits to deliver technology and build strong connections with students and families. She is the epitome of an outstanding school administrator.”

Taye Spears has been a rising star in David Douglas for 18 years. She came to the District as a volunteer AmeriCorps Mentor at Gilbert Heights Elementary in 2001. When her volunteer term ended, Gilbert Heights hired Taye as an instructional assistant, and she moved to the high school’s Fir Ridge Campus the following year in the same role.

In 2008, after earning her Master’s Degree in school counseling from George Fox University, Taye was hired to be a licensed counselor at Fir Ridge. She was elevated to Fir Ridge Assistant Principal in 2014 and moved to Alice Ott as Asst. Principal in 2017.

Taye moved to Alice Ott to replace former Asst. Principal Duane Larsen after he became the school’s Principal. Duane Larsen was Oregon’s Assistant Principal of the Year in 2015 while at Alice Ott.

“Taye is an amazing educator and person who continually leads through the lens of “what is best for students,” David Douglas Superintendent Ken Richardson said. “Taye’s heart and belief in her students is evident in her work as an educator. Her leadership, her passion, her strength, her voice all make Alice Ott Middle School and the David Douglas School District better places.  I am not sure I have the words to express how fortunate the David Douglas School District is to have Taye as an administrator. She is a true asset to the education profession, and I look forward to all of her future work to support students, families and her colleagues.”

Alice Ott Principal Duane Larsen added, “Taye is amazing! She is a very strong leader, and has such a breadth of skills. She uses her abilities to help students, families and the entire community.”

Support DDSD Kids While You Shop!

Help us Plan our Financial Future