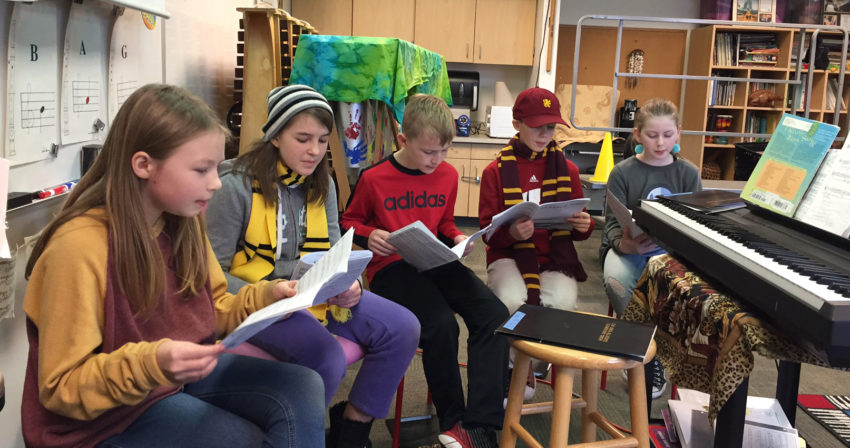 Once again, music programs from across the country are celebrating Music In Our Schools Month (MIOSM). The nationally recognized celebration, led by the National Association for Music Education, has been taking place since 1985. What began as an advocacy day in New York on March 14th, 1973 expanded nationwide to a month long celebration. Read more about the history of MIOSM.

We are so fortunate at David Douglas to have incredible support from our school board, and administration. Not only do ALL students receive a comprehensive, sequential music education at the elementary level, but also they are able to elect to participate in band, choir, or orchestra at the secondary level. While many Portland Metro programs have been greatly reduced or eliminated, the David Douglas music program continues to thrive! The value the David Douglas administration puts on music education allows district music teachers to teach thousands of students each day. This is also felt in classrooms through the amount of community support each school receives.

The David Douglas School District has been nationally recognized 9 times by the National Association of Music Merchants as one of the “Best Communities for Music Education.” Also, David Douglas was selected as a GRAMMY Signature School twice. The program recognizes top U.S. public high schools that are making an outstanding commitment to music education during an academic school year. For the past three years David Douglas students have had an extraordinary music opportunity through a District partnership with the Oregon Symphony.The three-year program was made possible by a grant, awarded to the Oregon Symphony, from the Oregon Community Foundation’s Studio to School initiative. The Oregon Symphony chose DDSD for their program. We are looking forward to year number four in 2019!

Not only has the program brought symphony musicians into the classroom but given our students the opportunity to participate in a Carnegie Hall Link Up concert at the Arlene Schnitzer Concert Hall.

Celebrate MIOSM on social media by changing your profile picture! Get the Music In Our Schools Month logo here.