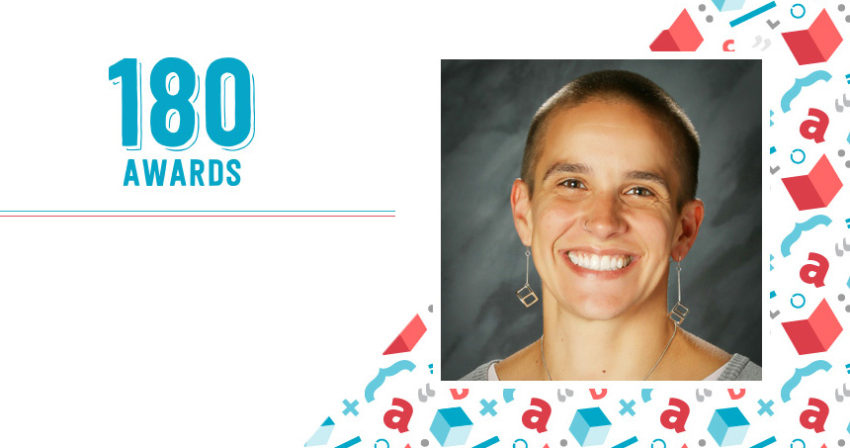 Global learning company Houghton Mifflin Harcourt (HMH) today announced that J Geurts, a math teacher at Floyd Light Middle School in Portland, Ore., has been named one of only six recipients of the prestigious 2018 180 Educator Awards. The awards, now in their 12th year, recognize educators across the United States who have helped advance the trajectory of their students’ progress in reading and math, fostering both personal and academic growth.

Ms. Geurts is being recognized for guiding her students to great success. A leader in the David Douglas School District for students and teachers using the intervention program MATH 180, Ms. Geurts helps the most challenged students grow to view themselves as “true mathematicians” with her preparation, dedication and compassion. Her ability to see and understand the needs of students with special learning challenges has contributed to impressive growth and achievement in her classroom. Additionally, Ms. Geurts serves as a mentor for MATH 180 peers across her district, helping to brainstorm classroom management strategies and foster new ideas for moving students forward. According to one student, “I have had many great math teachers who have helped me, but none have given me the strength, encouragement and tools that Ms. Geurts has.”

“I start with lots of structure and predictability until kids get used to me being really reliable, and then they start to trust me,” said Ms. Geurts. “Once they trust me, I can push them further than they maybe thought they could be pushed. Once they get used to that pressure, they will start to push each other, and then eventually they start to push themselves, and at the point that they are owning that challenge, excellence just sort of becomes a habit.”

Ms. Geurts will receive an invitation to attend the 2018 Model Schools Conference in Orlando, Fla., in June 2018, where an award ceremony will be held to recognize her achievements. She will also receive an additional library of HMH titles for her classroom that will be selected specifically for her students’ ages and reading levels.

Watch a video about Ms. Geurts