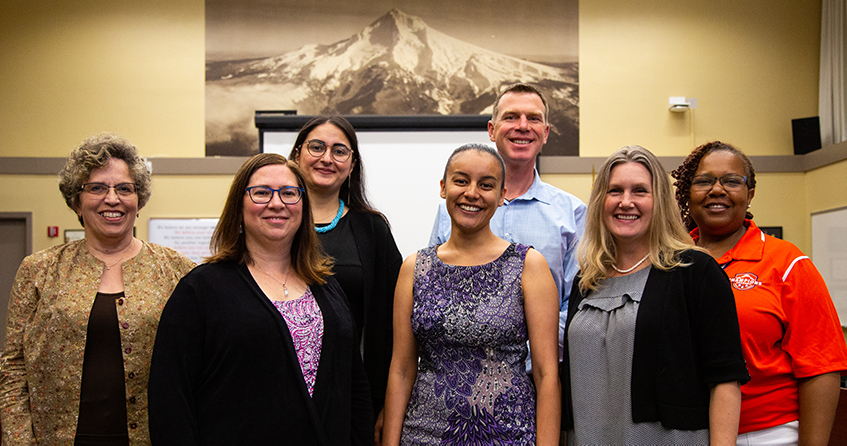 Donna Barber, appointed earlier this year to fill a vacancy on the Board, and 28-year Board veteran Frieda Christopher, were elected May 21 to new terms. Donna Barber will fill out the remaining 2 years of the term vacated last year. Frieda Christopher was first elected to the School Board in 1991. She is by far the longest-serving member of the Board.

Meanwhile, Sahar Muranovic and Aaron Barrow were elected for the first time to the School Board and began serving their first terms after being sworn in. In addition to swearing in newly elected Board members, the School Board chose Andrea Valderrama to serve as Board Chair for the 2019-20 school year. Board member Stephanie Stephens was elected Vice Chair.

Here is an introduction to our two newest Board members:

Sahar Muranovic is a first-generation Iranian-American immigrant who grew up in Vienna, Austria. Having moved from one country to another as a child, Sahar knows first-hand how difficult transitioning to a new school can be, especially when having to learn a new culture and language. She became a U.S. citizen in February of this year, and decided to run for the David Douglas School Board to make sure the voices of our immigrant and refugee communities are heard and elevated.

Sahar previously worked as the Volunteer and Training Coordinator at the Immigrant and Refugee Community Organization (IRCO), where she held trainings and interacted with school-based staff on a regular basis. She is a community organizer, focusing primarily on racial equity and reproductive justice. Sahar is an advocate of restorative justice practices and ending the school-to-prison pipeline, investing in mental health services and social workers, and providing inclusive and comprehensive sex education for all our youth.

She has a Master’s degree in International Human Rights and a Bachelor’s degree in Business. She is also a member of Multnomah County’s Community Involvement Committee, where she hopes to elevate the voices of historically marginalized communities. When not spending time with her three dogs and three cats, Sahar is teaching trauma-informed yoga or high-intensity fitness classes.

Aaron Barrow has lived in the David Douglas School District for 5 years, and has two sons who attend Ventura Park Elementary. He ran for School Board to help them and other students have the best educational experience possible. He has been attending School Board meetings for the past year and decided he wanted to do more than “sit on the sidelines.” He has been an active classroom volunteer and member of the PTA at Ventura Park.

Aaron is a five-year Air Force veteran who holds a Bachelor’s Degree in Psychology from Southern Oregon University. In his day job, he provides mental health care at the Veteran’s Administration, assisting other veterans suffering from PTSD, addiction disorders, traumatic brain injuries and depression.

When not at work or volunteering, Aaron spends time with his family hiking, playing in Portland’s parks, or exploring OMSI and the Portland Art Museum.