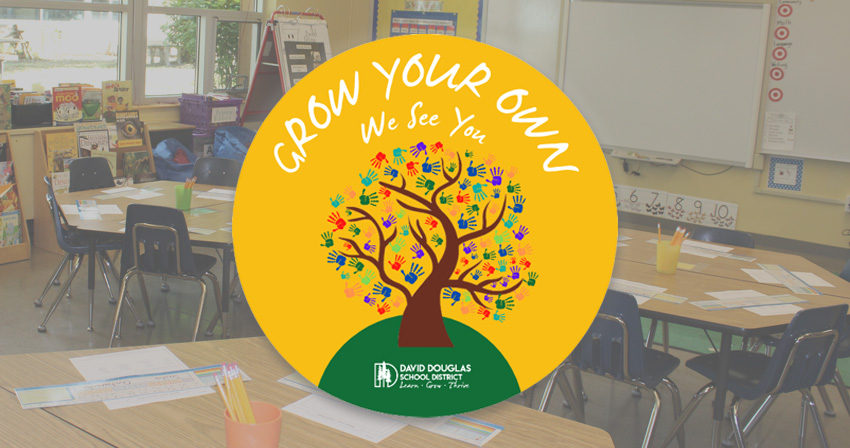 The David Douglas School District is among the most broadly diverse in Oregon. We are 64% students of color, including Latinx, Asian, Black, Indigenous and students who identify as multi-racial. They speak dozens of different languages from across the world.  Diversity is arguably our greatest strength as a school district.

But when we talk about our amazing diversity, we are talking only about our students and their families. Only 10% of teachers and 20% of administrators identify as non-White. Though it is slowly growing year after year, our staff diversity does not align with our families.

For the sake of our students, our families and our staff, this needs to change. Research is clear that students benefit when educators better reflect their own demographics.

Our Staff of Color Affinity Group is leading this effort. This group has created three Freedom Dreams, their hopes and demands for bringing true equity, diversity and inclusion to our curriculum, our professional development, and, in Freedom Dream #3, our hiring and retention of staff.

Freedom Dream #3: We want to build a district culture that is unapologetic about hiring staff of color to increase representation of our student population.

In one step toward that end, the District recently received a $336,000 “Grow Your Own” grant from the Oregon Department of Education through the Educator Advancement Council to fund a Teach Now program that will encourage, mentor and financially support community members and classified staff to become teachers in the District. DDSD is  partnering with Warner Pacific University to help recruit and educate participants.

David Douglas also has a share of two grants secured by the Multnomah Education Service District (MESD) to support districts in East Portland and East Multnomah County to develop Grow Your Own programs. In addition, we have a pending grant submitted to Meyer Memorial Trust in the amount of $100,000 to help offset costs for Warner Pacific or Portland Community College for our participants.

This is on top of existing District programs partnering with local colleges and universities to help support our students who pursue a college degree in education.

To lead these and other related efforts, David Douglas has tapped Alice Ott Middle School Assistant Principal La’Shawanta ‘Taye’ Spears-Hardy. Going forward, she will be our District administrator in charge of our Grow Your Own efforts.

It’s a path Spears-Hardy knows well. About 20 years ago she was an elementary school volunteer who later was hired as an instructional assistant. Eventually she went back to school and became a counselor at Fir Ridge Campus, and then became Fir Ridge’s Assistant Principal before moving to Alice Ott, where this year she was named the top assistant principal in the state of Oregon.

“When I first started in the District, I was a single mother of two,” Spears-Hardy said. “Although I had obtained my BA, I was told that I needed more. I knew by earning additional education and an administrative degree, my footprint would be more impactful. My purpose wasn’t only to impact my children but also the children and staff of David Douglas and my community.”

While providing financial support for tuition and other costs is a huge incentive for aspiring educators, Spears-Hardy knows that providing mentorship is equally critical, and she hopes to give that to those enrolled in the program. Her own journey was assisted by District administrators who identified her potential, helped identify a path and encouraged her along the way.

“Ron Knight (retired Fir Ridge Principal), along with the late Sue Summers (Director of HR), offered me additional mentoring,” Spears recalled. “During their mentoring support, we identified a career in school counseling, which would lead to administration. My decision to pursue an administrative license came under the guidance of Linda Vancil (former Principal of Fir Ridge Campus).”

We currently have more than two dozen people, mostly District classified staff, enrolled in the program. As our aspiring educators move toward their goal, thus fulfilling a critical goal for the District, we will be spotlighting them and describing their journeys. Watch for those profiles on our social media platforms – Facebook, Twitter and Instagram.

Grow Your Own Video

Hear about the vision and importance of the Grow Your Own project from David Douglas staff.