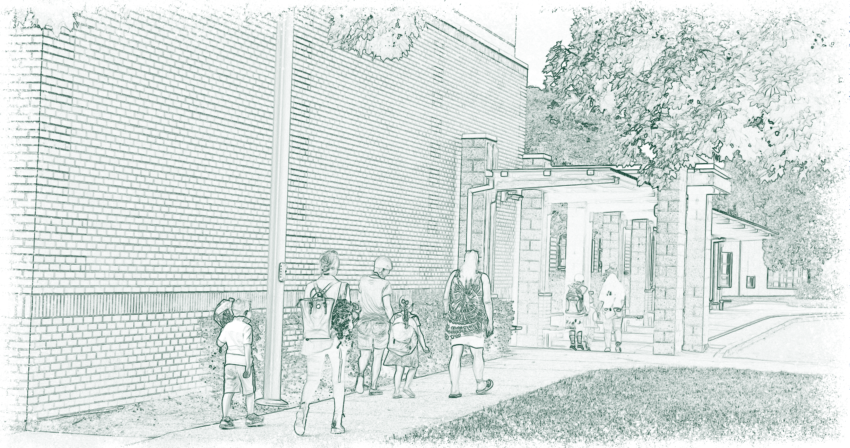 The blueprint imagery used in this article and linked bond pages are not renderings of future plans. They are simply artwork created from existing building photographs.

The David Douglas Bond Development Committee held the final of five meetings on Monday, Dec. 13, when it approved the framework of a roughly $150 million bond measure to recommend to the School Board. The School Board will hear the proposed bond package during its Jan. 13 meeting.

The Committee used the District’s Long Range Facility Plan (LRFP) to prioritize and recommend a list of bond construction projects.

One primary need identified in the LRFP is to accommodate future growth and a need for additional educational spaces at the elementary level districtwide. According to the plan, the construction of a new elementary school would allow future growth without overcrowding classrooms in the nine existing schools.

Additionally, the District aspires to provide preschool at every elementary school, so a new school building would also free up space in existing schools for that purpose. Existing elementary schools could also benefit from additional space for recreational or other non-traditional uses such as art and music.

Finally, the District’s nine current elementary schools were all built in the 1950s and 60s. At some point, they will all need major renovations or to be replaced entirely. A new elementary school would provide the space to allow that gradual process to begin happening over the coming years.

The LRFP also calls for the gradual replacement of the North and South main buildings on the David Douglas High School campus. The main buildings on campus were built in 1954 and are out of date for today’s educational needs, according to the plan. This process would be phased in over many years.

More than $189 million in critical capital improvements to existing District schools were also identified in the LRFP. Depending on the building, these include renovations and deferred maintenance projects such as new roofs, upgraded HVAC systems, window replacements, remodeled educational spaces, new sewer, plumbing, electrical and alarm systems, etc.

The Bond Development Committee did the difficult work of prioritizing the most immediate needs identified in the LRFP and paring them down to a financially manageable bond package.

Based on this work, the recommended bond package and associated costs that the committee developed contain 3 primary components:

The Bond Development Committee will present its recommended bond package to the School Board during its meeting at 7 p.m. Thursday, Jan. 13. The Board will then hold a workshop to discuss the bond measure in more detail on Thursday, Jan. 27. The School Board will vote whether or not to place a bond measure on the May 17 ballot during its Feb. 10 meeting. These meetings should provide many opportunities for District residents to provide input.