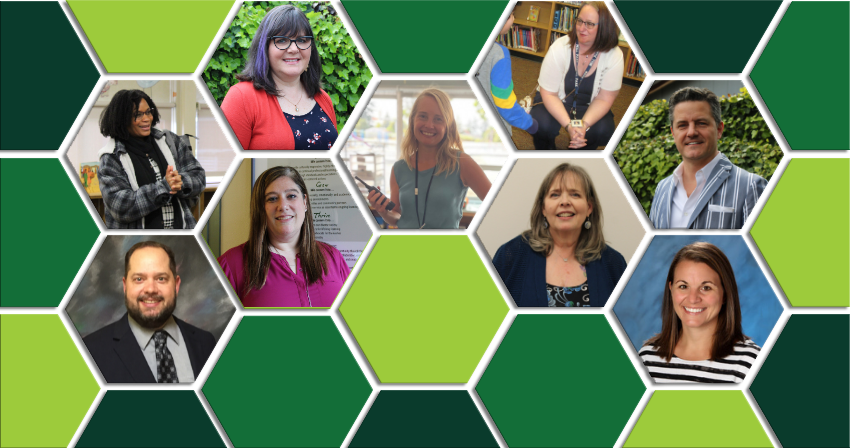 The David Douglas School District will have new principals at five schools for the 2022-23 school year. The District has three additional new administrators and has also named an interim principal to the position permanently. Meet our new administrators:

Lindsay DeFazio has been selected as Principal of Earl Boyles Elementary School effective July 1. She will be replacing Ericka Guynes, who will retire at the end of this school year.

Lindsay DeFazio joined the David Douglas School District in 2004. She taught at every elementary grade level over the next decade at Menlo Park, North Powellhurst and Gilbert Park, while also spending one year as the Title 1 Specialist at Alice Ott Middle School.

In 2012-13, she came to Earl Boyles as the Title I specialist and has since served the school as Student Achievement Specialist and Assistant Principal.

“Lindsay DeFazio has successfully worked in many different levels of our District,” said Andy Long, who serves as the District’s Director of Education. “At each one, she has been an amazing instructor and true champion for students. We are confident that Lindsay’s passion for the entire Earl Boyles community will be felt immediately as Principal next year.”

Lindsay received her Bachelor’s Degree at Oregon State University and her Master’s Degree from Concordia University. She also holds a Principal’s License.

She will be replacing Kellie Burkhardt, who is retiring at the end of this school year.

Sarah Phillips joined the David Douglas School District in 2002. She began her career as an ESL teacher at Gilbert Park Elementary, and remained at that school through 2014-15 with stints as a grade 4 and kindergarten teacher. In 2016-17 she moved to Mill Park Elementary as a Language Development Specialist and became the school’s Student Achievement Specialist three years later.

“Over many years in David Douglas, Sarah has formed and maintained caring relationships with students and staff wherever school she has worked in,” said Andy Long, who serves as the District’s Director of Education. “Her knowledge of our District and families, impressive organizational skills, and strong work ethic make her a great fit for the next principal at Menlo Park Elementary.”

Sarah received her Bachelor’s Degree, Master’s Degree, and Doctorate of Education at University of Portland. An application is in process for a Basic Administrative License.

Lydia Poole Smith has been selected as Principal of Ventura Park Elementary School effective July 1. She replaces Holly Schauer, who next year will be the new Principal at Alice Ott Middle School.

Lydia Poole Smith comes to David Douglas from the Portland Public School District where she has served as an Assistant Principal from 2012-2020 and more recently a principal. She has a variety of experiences as an assistant principal, having served at a K-5 elementary school, a Head Start school and a K-8 school. She became Principal at Markham Elementary in 2020.

“As a new leader in David Douglas, Lydia Poole Smith will bring a strong commitment to equity, with a focus on building and maintaining strong relationships,” said Andy Long, who serves as the District’s Director of Education. “Lydia is someone who will bring high expectations for all to Ventura Park Elementary. We are very excited and honored to welcome her into our District.”

Ms. Poole-Smith received her Bachelor’s Degree at Cascade College and her Master’s Degree at Warner Pacific.  She holds a Professional Administrator License.

Holly Schauer has been selected to serve as the new Principal at Alice Ott Middle School for the 2022-23 school year, effective July 1. She will replace Duane Larson, who is retiring at the end of this school year.

“Holly Schauer’s strong servant leadership will continue to shine at Alice Ott Middle School,” said Andy Long, who serves as the District’s Director of Education. “She is a middle school teacher at heart and understands the unique needs of middle school students. Holly’s commitment to all students succeeding, along with her solid communication skills, will be real assets as she moves into this new role.”

Holly received an undergraduate degree in music from Belmont University. She received masters degrees in music and education from University of Portland.

Shawna Myers has been appointed to be the new Principal of David Douglas Online Academy (DDOA), our new K-12 online school that launched this year, effective July 1. She replaces founding Principal Linda Vancil, who is retiring.

Shawna joined David Douglas in 2003 as a school counselor at David Douglas High School. In 2016, she was named the Chair of the DDHS Counseling Department and served in that role until 2021-22 when she was selected to be the counselor for the DDOA.

“During the entire interview and screening process, her excitement to grow a program that offers other options for kids, her passion to serve, and her commitment to equity shined,” said Superintendent Ken Richardson. “We are very excited about the leadership Shawna will bring that will continue to grow the great work being done in our David Douglas Online Academy.”

Shawna holds a BA in Business from the University of Oregon, and received a Masters of Education from Portland State University in 2003. She earned her Principal’s License from Concordia of Illinois in 2021.

Jeanette Sealy has been named the Director of the Multnomah Early Childhood Program (MECP). She replaces Lisa Grotting, who is leaving the position at the end of this school year.

Jeanette Sealy has served as Assistant Administrator of MECP since 2013 and now steps into the Director role.

“Throughout the process, it became evident that Jeanette’s skills, experience, and knowledge of the program stood far apart from other applicants,” said David Douglas Superintendent Ken Richardson. “Her ability to collaborate and partner with families, her advocacy of the program at a state level, and her instructional leadership are a few key components that set her apart from the rest. She is clearly passionate about doing what is best for the program staff, students and families and is excited to take on the challenge of this important role.”

She will not be a new administrator next school year, but earlier this year we announced to the Mill Park Elementary community that Interim Principal Heather Craig had been appointed to the position permanently.

Heather came to David Douglas in 2015 as a fourth grade teacher at Mill Park before serving as the school’s Language Development Specialist in 2019-20. She was named Interim Principal at Mill Park at the beginning of this school year.

She holds a BA from the University of Oregon, a Masters in Education from Portland State, and received her Principal’s License from George Fox University.

He earned an BA in Music (classical guitar performance), and an MAT in Teaching from Pacific University in 98′ and 99′, respectively, and began his career as a classroom music and math teacher. Derek earned a doctorate (Ed.D) in Educational Leadership from George Fox University in 2016.

Michael Salitore joined the David Douglas School District on July 1 as the new Director of Student Services. He replaced Mary Pearson, who has moved into a new position at another district.

Michael comes to David Douglas from the Molalla River School District, where he served as the Director of Supported Education for eight years. He has prior experience as a Special Education Program Administrator, Middle School Assistant Principal, School Psychologist and Behavior Specialist.  Michael served an enlistment as a weather observer in the U.S. Marine Corps.

“Michael comes with a tremendous amount of experience and is well known and well respected throughout the State,” said David Douglas Superintendent Ken Richardson. “More importantly, his core values directly align with ours as a District. His passion for service, students, and equity were all demonstrated through the interview and reference process.”

The Student Services Department provides a variety of student programming outside of core curricula, such as special education, counseling services, behavioral supports, identification, and support for houseless students, Talented and Gifted (TAG), health, early childhood education, and a variety of others.

Dr. Salitore said, “I am excited to join the work of the DDSD team, particularly at this time in public education there is an opportunity to rethink how we educate students with differences, support families with needs, and deliver on our mission. I look forward to learning about the momentum in place and carrying the good work forward.”